ICAPS 2018 was held from June 23-29, 2018 in Delft, The Netherlands. Conference chairs are Matthijs Spaan and Mathijs de Weerdt. Program chairs are Sven Koenig and Gabriele Röger.

Code of Conduct Summary: The International Conference on Automated Planning and Scheduling (ICAPS) is dedicated to providing an inclusive conference experience for everyone. Attendees are expected to:

Cancellation policy: Cancellations before the 20th of June 2019 will be honored with a $200 processing charge. After this date, we will not be able to issue refunds. Cancellation requests can be sent to khartman@executivevents.com. Please note that arranging refunds may require additional time.

In order to obtain a certificate of attendance from ICAPS 2019, please send an an email to 2019icaps [AT] gmail.com.

ICAPS 2019 will take place at the University of California, Berkeley (UC Berkeley) in Berkeley, California, USA.

The city of Berkeley is near both Oakland International Airport (OAK) and San Francisco International Airport (SFO). If you arrive during Bay Area Rapid Transit (BART) subway operating hours (see below), both airports will have reasonable public transit options that will arrive near to conference accommodations and venues. If you arrive outside of those hours, you may need to use a taxi cab or rideshare service. If you plan to take a taxi or rideshare then OAK will likely provide the least expensive and quickest transit. However, SFO provides more international and domestic flights and typically has less expensive flights. 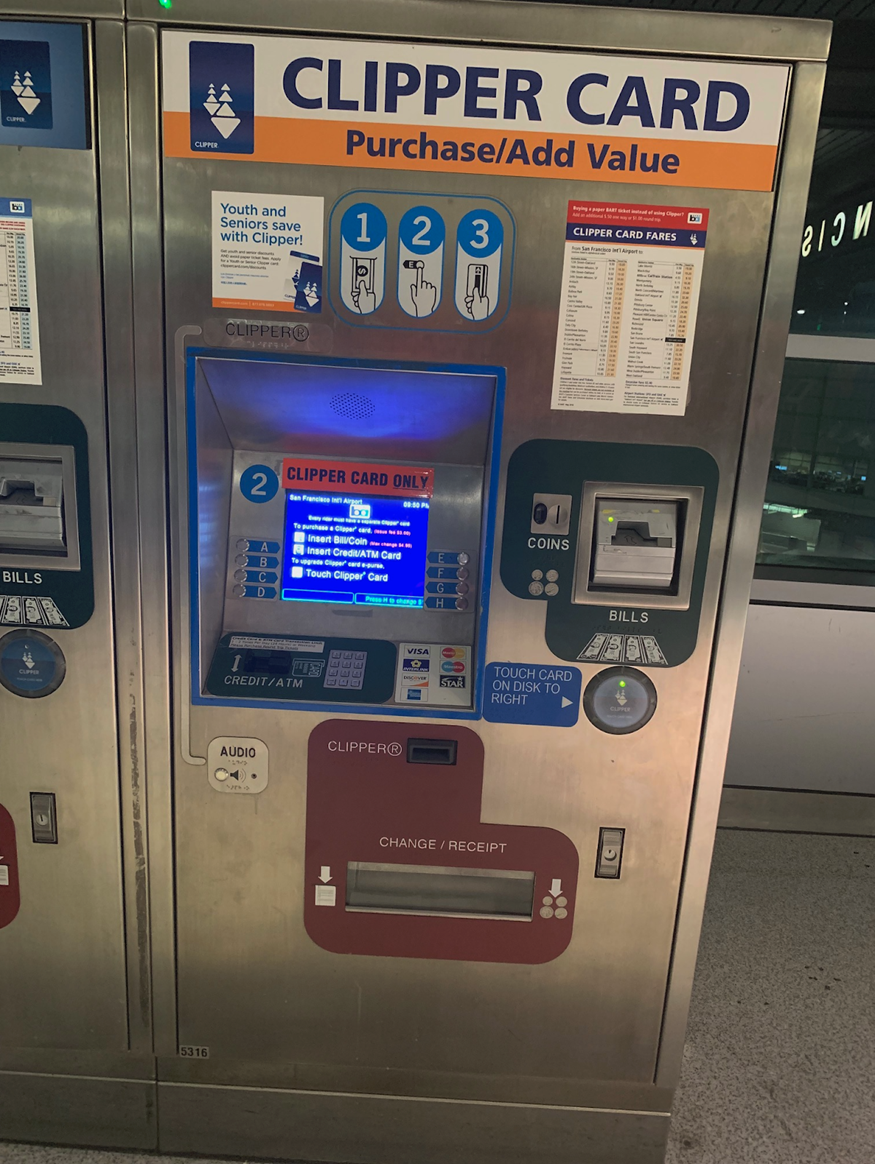 Clipper Card automated kiosk. Public domain photo by J. Benton
Clipper cards allow easy public transit fare payment across the Bay Area (including on buses and trains). Using a Clipper card avoids the need to carry currency. You may obtain these at the train stations at the San Francisco International Airport, Oakland International Airport, and at the Downtown Berkeley Station. They cost 3 USD but most public transit services offer fare discounts when you use a Clipper card. Fare money can be added at any train station (for immediate availability) or at clippercard.com (available within 2 days).
If you arrive outside of BART boarding hours (listed below) you may need to take a taxi or rideshare (Lyft or Uber) service to the venue. BART train boarding hours: Last trains: The BART subway system services both the Oakland International Airport (OAK) and the San Francisco International Airport (SFO). To reach ICAPS 2019 when taking BART a reasonable subgoal is exiting the train at the Downtown Berkeley Station.
The main bus company operating within Berkeley is called AC Transit. They charge 2.35 USD per ride and request exact change when boarding (though you may pay 3 USD and they will not complain and will not give you back the difference). To avoid the need to carry money, you may purchase a Clipper card and add adequate funds to it.
Please see below for instructions on reaching ICAPS 2019 accommodations from San Francisco International Airport (SFO) and Oakland International Airport (OAK). 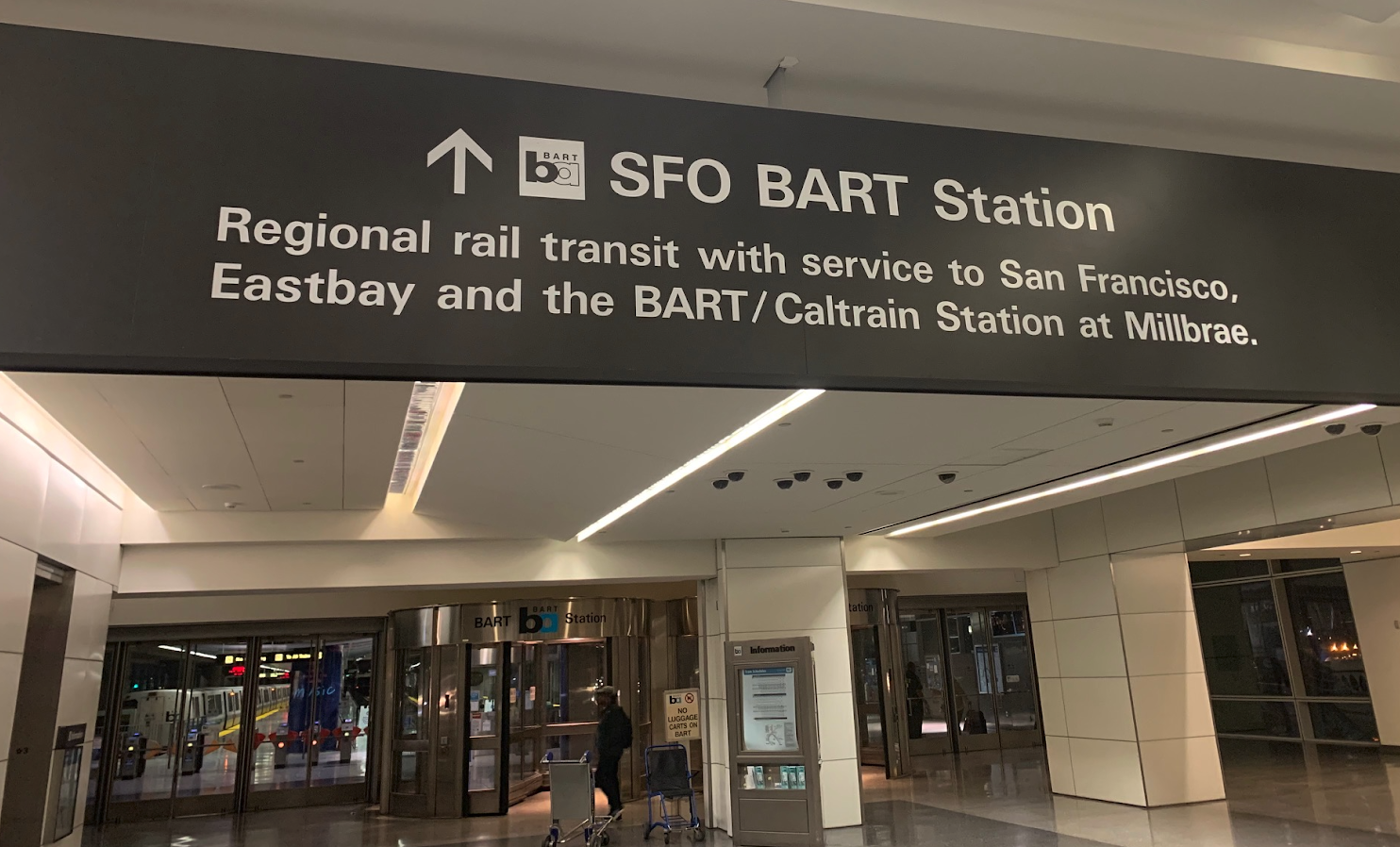 Sign in front of the SFO Bart Station inside the San Francisco International Airport. Public domain photo by J. Benton

To get to the station, follow signs for BART or BART/Caltrain or ask airport staff at an Information Kiosk to assist you. You will need either a Clipper card (see above) or a BART ticket. Those can be purchased in the station at automated kiosks. Board the yellow line train in the direction of San Francisco-Pittsburg-Bay Point. Transfer to the red or orange Richmond line at 19th-Street Oakland. Exit at the Downtown Berkeley Station. For those using transit directions from other sources (e.g., Google Maps): 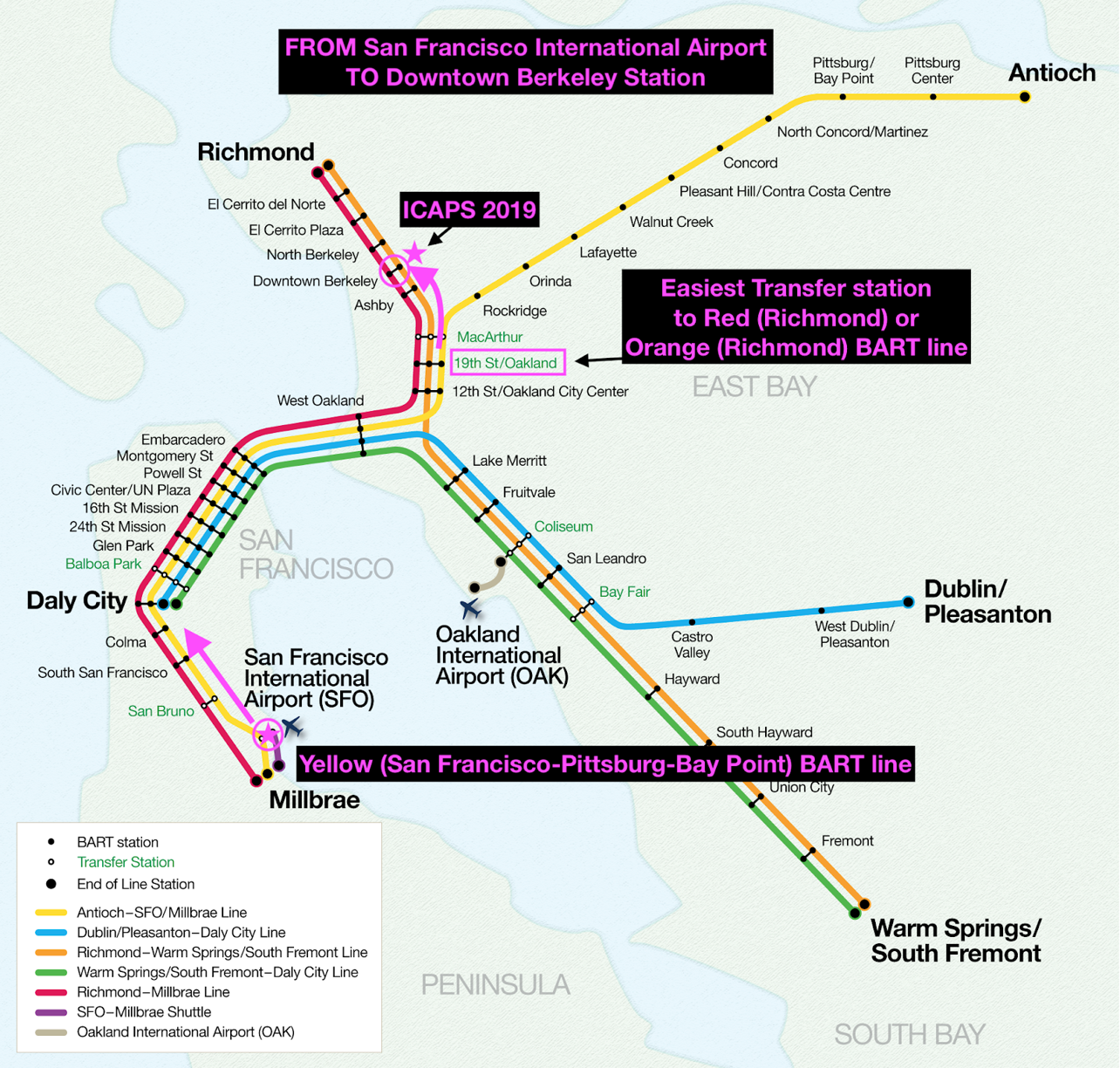 You will need to exit the terminals to reach the BART station. Take the Oakland International Airport BART to the Coliseum station. This service is sometimes called the "beige line", but BART does not refer to it as such. From the Coliseum station take the orange line headed towards Richmond. Exit at the Downtown Berkeley station (~25-minute ride). 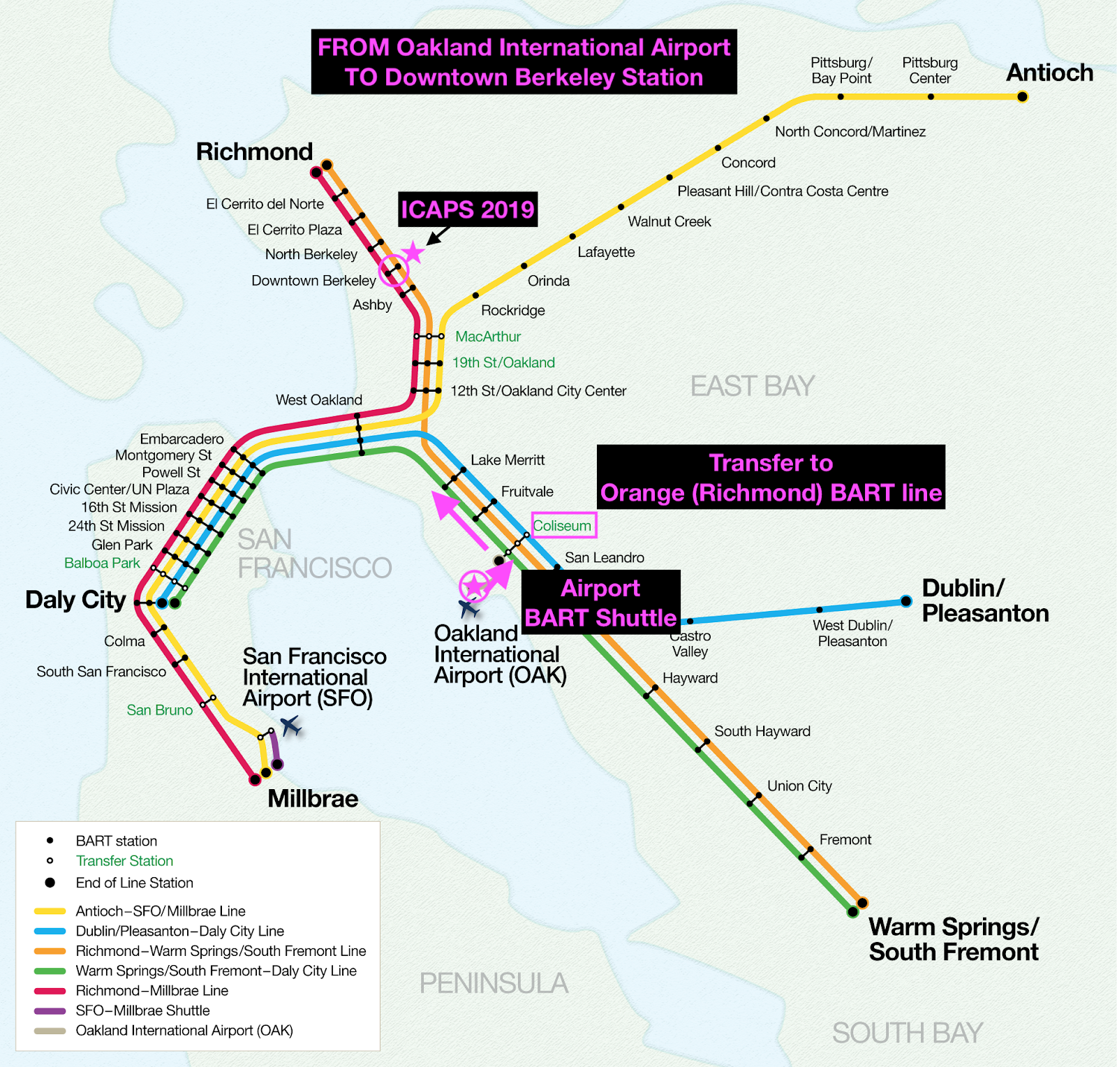 Hotel Shattuck Plaza is one street block away from Downtown Berkeley Station; it is very close (about 130 meters/450 feet). After exiting the station proceed south toward the street called Allston Way. If you approached Center Street, you probably went the wrong direction. You will see a Walgreens Pharmacy as you reach Allston Way. Cross to the south side of Allston and turn right to follow it west from that corner. You will see the Hotel Shattuck Plaza on your left. You should only need to cross Allston. If you crossed two streets, you likely made a mistake. If you reached Milvia Street, you may have passed the Hotel Shattuck Plaza without realizing it. 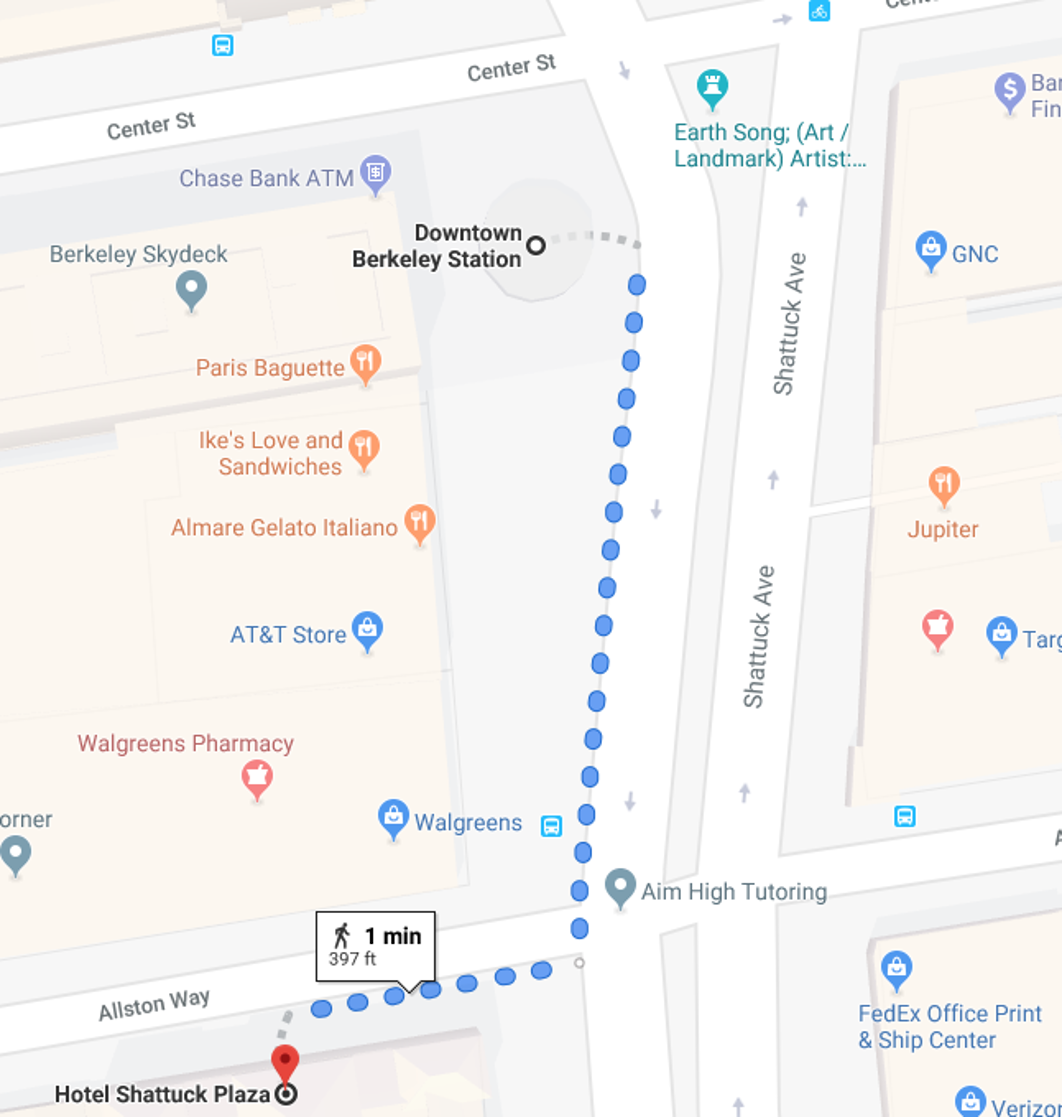 © Google Maps
Resident Hall Unit 1 is at 2650 Durrant Street, Berkeley, CA (https://goo.gl/maps/waY2KFiKNK5utiar7). You may either take public transit, walk, or use a rideshare service (e.g., Uber or Lyft) to Residential Hall Unit 1.
If you have limits on mobility we suggest a rideshare service over transit with a bus from Downtown Berkeley Station to Resident Hall Unit 1. The walk to and from the bus stops totals to approximately 0.2 miles (0.3 km) to 0.5 miles (0.75 km) depending on the route you take. To obtain bus instructions, please use one of the services listed on the AC Transit site (http://www.actransit.org/trip-planner/).
It is approximately a 0.9 mile (1.5 km) walk in total. To walk there, proceed south toward a street called Allston Way. If you approached Center Street, you probably went the wrong direction. You will cross Kittredge Street and Bancroft Way. You will walk approximately 0.5 km (approximately 0.25 miles) to reach Durrant Street. Turn left (east) on to Durrant Street. You will cross Fulton Street. If you reached Milvia Street, you probably went the wrong direction. You will then cross Ellsworth Street, Dana Street, Telegraph Avenue, and Bowditch Street. You will see a building with a "Unit 1" sign next to the address 2650 Durant. This is your destination. If you reached College Avenue, you probably passed Unit 1 without realizing it. 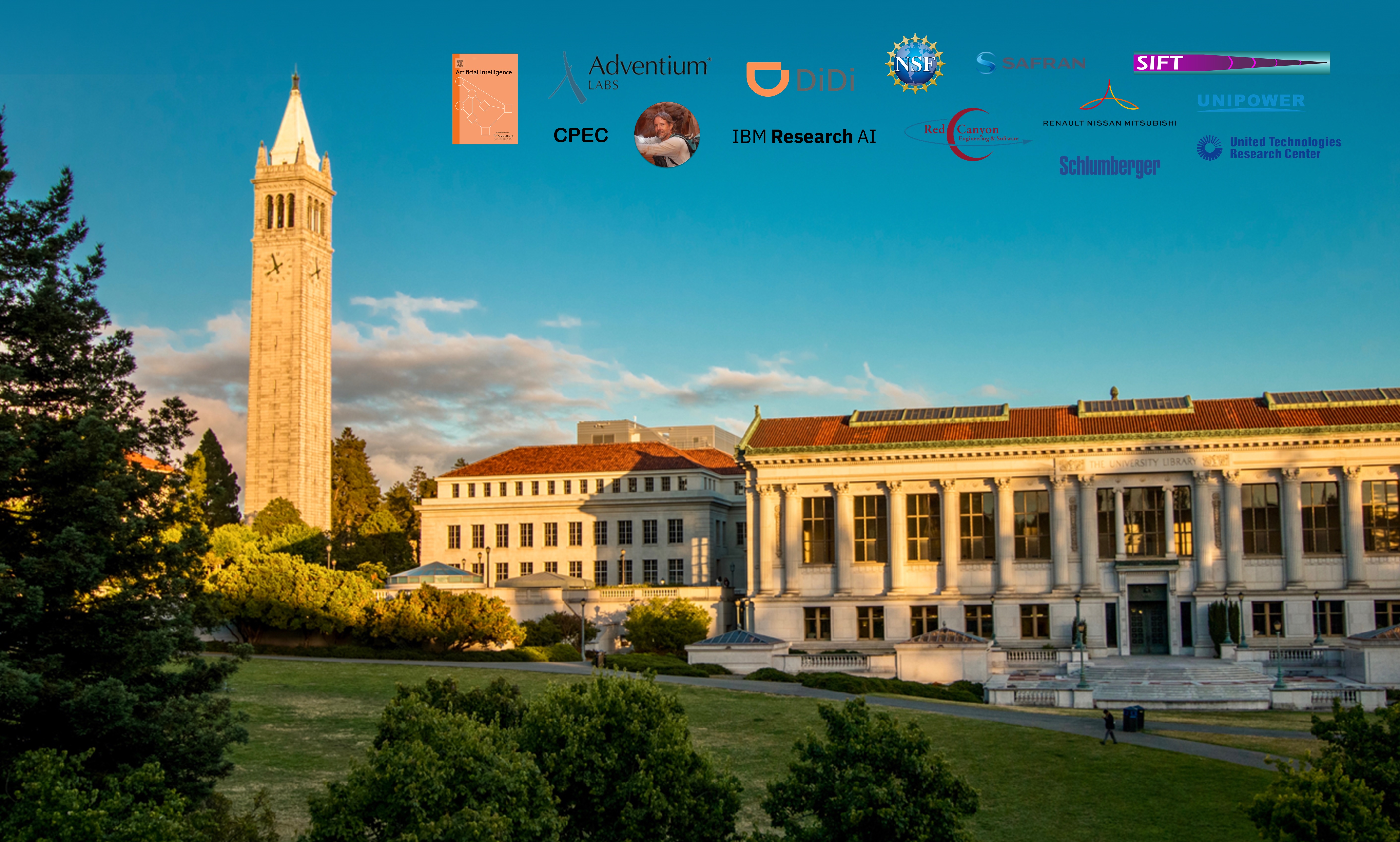